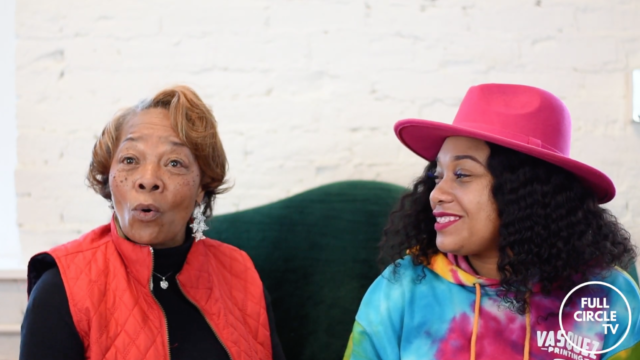 Kayla Lewis-Allen is a Milwaukee native who produces videos for her television channel Full Circle Television. Kayla now lives in Madison with her husband Marcus Lewis-Allen, who is also a co-founder. They launched in January 2020.

I talked with Kayla as Full Circle Television is her brainchild.

Kayla says Full Circle Television has a focus on romantic, platonic and familial relationships and next season they’re adding in co-parenting as it’s something that appeals to her.

She got the idea to discuss relationships when she was engaged to her husband.

“I used to watch an old show,” says Kayla. “It’s super old but it was with a husband. He came home every night and he’s like, to his homemaker wife, ‘beer!’”

She snaps her fingers as she’s telling me this.

“It was super snappy,” Kayla says. “Where’s my dinner? Where’s my beer?”

Kayla said that she didn’t want that to be a part of her marriage at all.

“Even the relationships that I saw growing up, I never wanted to be anyone’s wife, because of the things that I saw being put out there either on TV or in my own personal life,” says Kayla. “So I just had to start searching.”

Kayla used to work at a Black therapy clinic in Madison, so being in that environment prompted her to reflect on her own life. If she was up at 3 a.m. she’d ask herself questions like she was in therapy.

Then she started engaging with her husband in these questions, to break out of the fluffy conversations people can get into when they’re freshly enamored in their relationships.

“I mean, yes, it’s cool to know their favorite color because maybe you’ll be able to purchase them blue socks or something like that,” says Kayla. “But that doesn’t help when you are in a very tough place or in a dark place. You don’t know how to work with this person.”

That’s where the idea of Full Circle Television comes around, having discussions and conversations on the things people are going through. Though Kayla says she makes sure Full Circle isn’t like the reality TV shows that focus on the drama.

“You don’t want to put yourself in a vulnerable place and someone is asking you these questions and badgering you about your intimate relationship with your partner,” says Kayla.

She says their mission is to be more.

Kayla has enjoyed creating content that speaks to the realities people face in friendships and relationships, to get at the things that we might not fully talk about with our friends and loved ones.