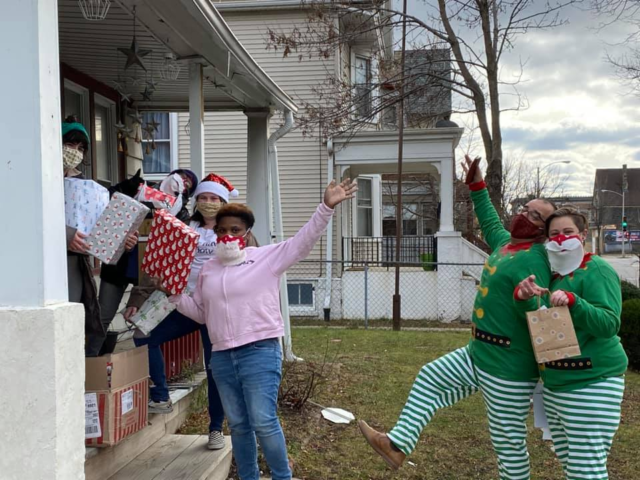 By the time you’re reading this, toys have been dropped off to some 130 kids in Milwaukee who may not have gotten presents this year otherwise. They have a few of their most wanted items sitting under a tree or tucked away until it’s time to receive them. Those toys were donated by the kids who live at Courage House, where LGBTQ+ youth who have been homeless or in some cases have been in juvenile detention centers live.

“We know that with the pandemic it’s taken a toll on all of us,” says Brad Schlaikowski, executive director of Courage MKE. “They wanted to do something to make sure that at least the children have something to smile about.”

Brad says that the foster children and teens who live at Courage House came up with the idea to donate gifts to children in need.

The holidays, he says, can be hard for some of the kids living at Courage House. They’re away from their family or perhaps they have bad memories associated with the holidays, so giving to other children can be uplifting for them.

“This project has brought them together on what the idea of a chosen family looks like,” says Brad. “Because it’s removing that distraction of what was or what happened in the past and says look at what we can do or what we’re going to do in the future.”

As the director, Brad says that he’s pretty proud of the kids for what they have come up with and are doing to help those in need.

“In theory, a 17-year-old can process a lot more than a 12-year-old but I still can’t imagine being 17 and having to process the things that these kids are processing,” says Brad. “So, I am beyond proud of them for this.”

The kids and teens of Courage House put up flyers asking for those who need help to sign up and have asked the community to help them in granting some of these gifts.

“Like anything with this house, the community has shown up and shown out when we’re opening it and for this project the community once again has opened their hearts,” says Brad.

Their basement is full of presents wrapped and organized by family, the kids have wondered about it almost every day.

“Are we going to wrap presents now or does this family have everything that they need?” Brad says they asked.

He says that the kids really want to do this from the heart. “Some days it’s a struggle to get these kids out of bed,” says Brad. “They’re teenagers, but to see them excited makes it all worthwhile because that means that they too are enjoying what the meaning of the holiday is.”

While toys have been delivered, Brad says that if you know a family or are one that may be in need of a little help this winter, check out their Facebook page. There may still be time to sign up.