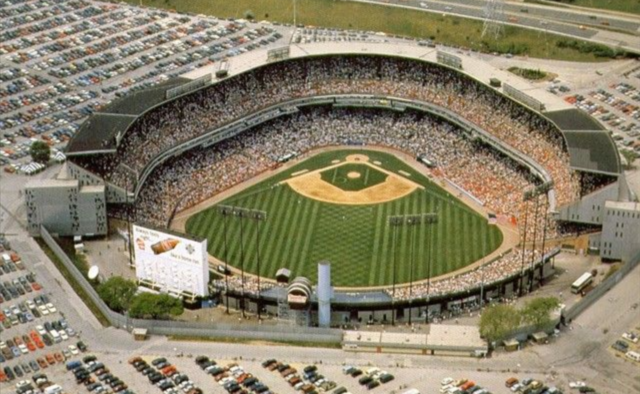 For the third year in a row the Milwaukee Brewers have made the playoffs, although this time there hasn’t been nearly as much ceremony as there was in 2018 and 2019. Tonight at 9:08 CST, the underdog Brewers play the first game of their best-of-three match against the league-dominating Los Angeles Dodgers — a series even the most optimistic Brewers fans don’t think leaves the team much of a chance of advancing. But still, the postseason is the postseason, and we’re grateful for at least the possibility the Brewers could pull off a historic upset this week.

This week has also given us another reason to be in a baseball state of mind, too: It marks the 20th anniversary of the Brewers’ final game at its beloved old ballpark, County Stadium.

We asked Radio Milwaukee staffers to share some of their favorite County Stadium memories, and from broken noses to luxury (and not so luxury) seats, they came up with some great ones.

Baseball games have always been one of my favorite sporting events to attend. On Aug. 7, 1996, I went to the Milwaukee Brewers vs. Baltimore Orioles game at County Stadium with my parents and three sisters. My oldest sister won tickets to the game through school, so we made an unusual weekday trip to the stadium to watch the game.

I can’t remember exactly when in the game this happened, but Eddie Murray stepped up to bat and hit a foul ball into the left field stands. And it landed, smack dab in the middle of my face, breaking my nose. I was rushed to the medical room where a doctor evaluated my injury and Bernie Brewer came to visit, giving me a baseball.

My mom got the ball that broke my nose from the gentlemen sitting in front of us (although from the way she tells the story, they weren’t so quick to give up a game ball). I got a wheelchair ride back to our car and we left before the game was over. Even though I have a mangled nose, baseball is still one of my favorite sporting events to attend and I have a great story about County Stadium!

My first game at County Stadium was Robin Yount’s 3,000th hit. I didn’t know who Robin Yount was. I didn’t know what a hit was. I didn’t really know what anything was. I was 2 years old. What I did know was that my dad was excited. And that made me excited. It’s still the thing that makes me excited about baseball. I’m a casual fan. I barely follow, but you bet, this weekend, I was out cleaning the garage with my dad and we had Uecker on the radio. As he called balls and strikes my dad told me about how he hated the Cardinals, how he cheered for the Red Socks in 1968 when we lost cause their players had the best sounding names: Rico Petrocelli, Carl Yastrzemski. And how his dad never drank a Coca-Cola again after the Braves left for Atlanta. I had a couple memories at County Stadium. Some good ones too. But my favorite memories are the ones I hear second hand from my dad.

I have MANY memories from the old days at County Stadium. The first is music related and the second is Packers related!

The year was 1993. The date was June 2. Paul McCartney made a stop in Milwaukee at good ol’ County Stadium. I was there and it was amazing.  Paul played on a stage set up in center field and I was literally in the last row behind home plate… aka (insert Justin Barney voice) THE FURTHEST YOU COULD POSSIBLY BE FROM THE STAGE! It didn’t bother me though. It was still one of my fondest live music memories of my life!

The year must have been 1984 or 1985. The Packers were playing the Minnesota Vikings. I was in the bleachers with my dad, cousins and uncle. Naturally, there were quite a few Vikings fans at the game. Amongst them was a kid whom I recall to be maybe 10 years old. The kid was sporting a fancy Viking ship-type head piece. A bunch of sloppy, drunk, rowdy Packers’ fans took the hat off the kid’s head and proceeded to toss it up, row-by-row, until the last person in the top row tossed the head piece overboard! Over the bleachers! How’s that for hospitality?! I don’t recall if the kid was crying or if his dad turned to fisticuffs.

I’m an ’80s baby and started going to the ballpark in the mid to late ’90s, so it always seemed “old” to me. The team was never very good when I was growing up, but there was a sense of ownership I felt, even as a chubby little 8-year-old. This was my team, my Brewers, playing in crusty old stadium. It wasn’t posh, but it was ours. I went to a lot of games as a kid, with my dad especially, and because I played Little League, I loved to keep score in a specialized notebook I brought along with me to the game. I also remember the seating policy being a little more lax back then; if the crowd was sparse, which it often was in the latter days of County Stadium, the kindly ushers tended to turn a blind eye to a kid and his dad looking for a better seat in the 7th inning. We ended up getting closer to the action than we deserved on more than one occasion. Maybe my little notebook gave us that “lower deck” cred.

But even though most my memories of County Stadium are a little janky, there was one game I remember where it felt like we got the hook up. My dad would sometimes try to trade our tickets at the exchange window once we got inside, trying to find a better seat. One day, on a particularly cold day early in the season, my dad sprung for “skybox” tickets. At least that’s what he called it. The skybox was a section of the stadium that wasn’t quite a suite, but it was enclosed in glass. Looking back, I’m pretty sure it was the visiting team press box, for when the stadium hosted football games. And best of all, it had heat, which came in quite handy at those early season games, where there were often snow flurries in the air. Talk about luxury, especially in a stadium that didn’t have a roof.

I have a distinct memory of sitting in the heated room, crunching on my the Chex Mix I brought from home (the cost of the “skybox” tickets alone meant no food at the game), feeling like “ah, this is the life.” Having only ever sat in the upper deck — or sneaking downstairs later in the game — I had never known was it was like to sit in the “good seats.” It felt like such a gem, hidden within a run down stadium. We never sat up there again, but I’ll be forever grateful for my dad that day. It was worth it to spring for the good seats once, but not get too used to it. That’s my dad for you.