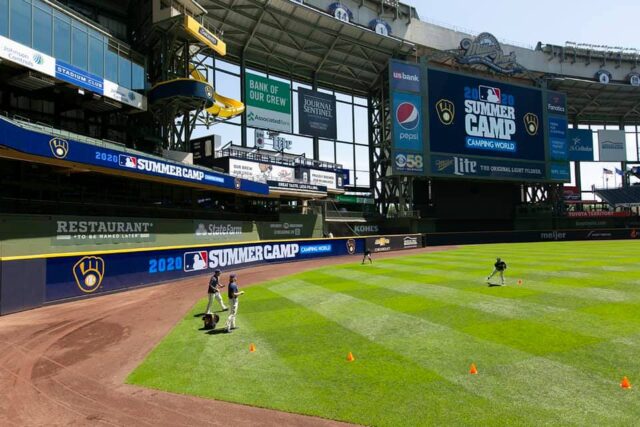 Last Wednesday, the Brewers unexpectedly announced that fans would be able to purchase one of 500 limited tickets to a Brewers game this season. The catch? Instead of a seat for yourself, a $50 purchase would instead net you a cardboard cutout of yourself to be placed in seats in or around the infamous statue of the team’s historic play-by-play sportscaster, Bob Uecker, which sits in Section 422 of Miller Park.

Just as quickly as the announcement came on Wednesday, the cutouts (deemed the “Cutout Crew”) sold out in 90 minutes on Thursday. Given the unique circumstances of this season and the fact that a portion of the proceeds went to the Brewers Community Foundation, it’s easy to see why. If you missed your chance to secure your paper persona however, you’re in luck as due to “popular demand,” more cutouts will go on sale tomorrow, July 7, at 10 a,m.

The cutouts will once again cost $50 and see a portion of the proceeds benefitting the aforementioned community foundation. As explained on MLB.com, fans can upload a photo online which will be transformed into a two-foot tall likeness with FOX Sports Wisconsin’s broadcasts of the games offering glimpses of the cardboard “Brew Crew” surrounding Uecker’s statue.

Among other guidelines, the team’s official site suggests participants wear team apparel, take a photo (not a selfie) against a solid-color background and only capture from your waist up.

The organization has made it clear that this is another limited opportunity and it’s safe to assume this batch of seats could sell out just as fast as the last. Moreover, given the uncertainty of fans being able to attend games at all this season and the fact that Miller Park will be becoming “American Family Field” in 2021, this may be your last opportunity to “attend” a game in Miller Park while it’s still under that famous moniker.

Instructions on securing a seat are available at brewers.com/cutoutcrew.