The Brewers got good 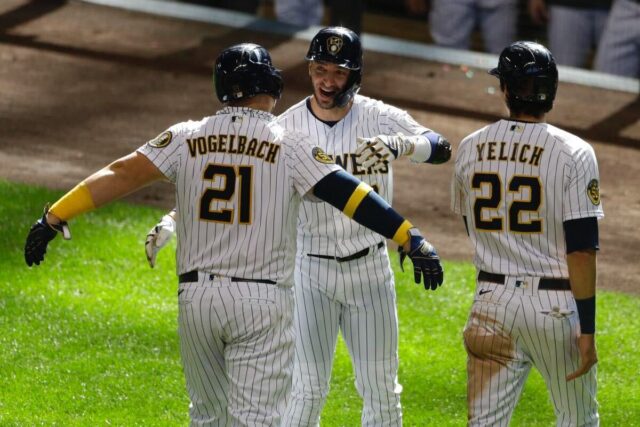 If Major League Baseball’s regular season ended last night, the Milwaukee Brewers would be in the playoffs.

That’s an incredible turnaround for a team that, for much of this uncanny, abbreviated baseball season, has shown about as much life as the cardboard cutouts in the stands. For weeks nothing could go right for Milwaukee’s baseball club. Lorenzo Cain sat the season out. Christian Yelich might as well have. Batters like Keston Hiura slumped badly, and at times the offense disappeared for entire games. Earlier this month the Brewers even suffered the humiliation of a no-hitter against the Cubs.

But there’s plenty of recent precedent for the Brewers surging in September, and recently there have been signs that manager Craig Counsell might be able to pull off his late-season magic once again.

Some of the team’s hope has come in the unlikely form of late acquisition Dan Vogelbach, a first baseman of rare heft who was slumping even worse than the average Brewer when the Mariners dropped him this season. Since joining the crew, though, he’s been an absolute slugger, hitting nearly 400 with three homers, including two that counted for all five runs in the team’s victory Sunday against Kansas City. If this were a normal season, he’d be an enormous fan favorite, his grinning face would be plastered all over T-shirts.

But the real success story of has been the pitching, which has been exceptional. Brandon Woodruff has been an ace. Corbin Burnes is emerging as a Cy Young candidate. Reliever Devin Williams is beginning to make a case for the NL Rookie of the Year Award. And Josh Hader is still Josh Hader, one of the game’s most feared closers. If the team does advance to the postseason, it will be because of them.

Yesterday’s win against the Cincinnati Reds brought the Brewers to a 500 record (27-27) for the first time in ages and temporarily puts them in position for the National League’s No. 8 seed in the playoffs. Can they hold on? It won’t be easy: To do so, they’ll likely have to win tonight’s rubber match against the Reds and then hold their own in a season-ending five-game series against the Cardinals, which will be spread out over four days.

But their fate is in their own hands, and for the first time this season, the team has actually been fun to follow. 2020 might not be such a lost year for the crew after all.